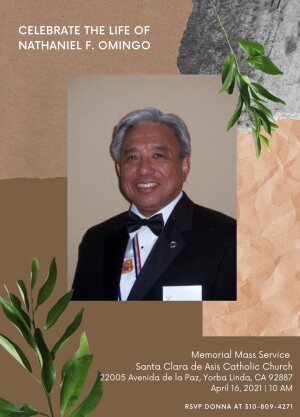 Nathaniel Floyd Omingo was born in Oakland, California on December 1, 1952 to Floro and Patricia Yujuico Omingo. They moved to Long Beach, California seven years after and in this city, he flourished. He proudly graduated from the California State University Long Beach, BA – Anthropology. He was also one of the founders of the Pilipino American Coalition (PAC) in 1972 which has grown to thousands of members.

Nathan (to his family and friends) also graduated from the Army Officers Candidate Course and became a First Lieutenant until he decided to become a Corrections Officer for the State of California Department of Corrections. While waiting for his results in 1984, he decided to go back to his parents’ hometown in the Philippines, where he met his wife, Laarni. It was a whirlwind romance, and they were married in July 1985. After a couple of years, he became a Parole Agent for the same Department where he worked and retired in 2005.

Nathan was the life of the party. He had ready jokes for all occasions. His knowledge of history and current events were unbelievable. His love of life was immeasurable.

Because he retired at a very “young” age of 55, he was able to do what he wanted. He delved on his hobbies like fishing and selling on eBay while he was the broker of Pure Gold Real Estate. He also served as a greeter at Santa Clara Catholic Church and reached his 4th Degree with the Knights of Columbus.

But his great love was traveling with his family far and wide. Only 18 more states and he would have been to all the states. Nathan and Laarni loved to travel together. They have been to different parts of the world, except for Antartica, Nathan had been in the 7 continents of the world. All in all, Nathaniel followed his two mottos – “Carpe Diem” & “La Dolce Vita.”

There were no regrets. He loved every minute of his life with his wife, Laarni; his son, Leland; and his poodle “Daddy’s Girl” Cosette.

To Nathan, thank you for a time well lived!

To send flowers to the family or plant a tree in memory of Nathaniel Floyd Omingo, please visit our floral store.