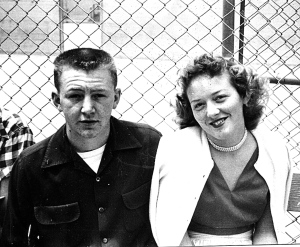 He leaves behind 3 children, 10 grandchildren and his high school-sweetheart, his lovely wife of 63 years, Carol Anne.

Back and forth in his ’40 Ford, up Avalon Boulevard from his trailer park home with Carol to distant UCLA, he soon earned his BS (1959) and MS (1961) engineering degrees with his thesis on the optimization of guidance and navigation. He started his career in the aerospace industry working on advanced concepts in guidance, control and navigation which then took the two of them to upstate New York.

Years earlier, while at Honeywell he invented the backup reentry guidance display for the Apollo Mission’s Reentry Vehicles. With the vehicle’s computers down, his display was used during the emergency manual Apollo 13 reentry.  While at Martin Marietta he developed a cockpit for the Martin SV5 Manned Space Vehicle (a predecessor to the NASA Space Shuttle.)  At Rockwell International, in the late 70’s, he developed the engineering prototype liquid-crystal display for the world’s first successful LCD production and the list of his contributions goes on.

He has been personally awarded 28 patents and has over 10 patents pending. And is the author/editor of the first definitive book on flat panel displays titled: Flat-Panel Displays and CRTs, published in 1983.

After becoming semi-retired at the age of 79, he tended to his and Carol’s two Koi ponds and wood-duck aviary on his property. He had kept an active pilot’s license for over 50 years but after selling his beloved Mooney, he spent his next years on extended car trips through Montana and Canada with Carol, and shorter trips hiking with family and friends but mostly tending to his back-yard zoo.

His own Koi, ducks, bull frogs, chickens and finch were only half of the picture, the rest of his weekly feed and seed purchases supported an entire neighborhood-ecosystem of pigeons, blue jays, mockingbirds & doves, squirrels & raccoons, the occasional rat & opossum and the ever looming hawks that frequented the back yard redwood tree that has towered over Dana Place for over 40 years.

If you’ve been to the circle at 7 or 8 in the morning, you’ve seen him.

Once you’ve spoken with him, you know him.

A true pillar to the community leaving our city with the legacy of the Children’s Garden at the Orange Public Library Main Branch.

And a true Patriarch; leaving his family and his friends with a model and blueprint of how to lead a gracious and loving life

He will be missed.